You are here: Home › About Liz Women of Faith, Women of Joy, Extraordinary Women, Among Friends, Time Out for Women, Moody Women, Women of Virtue, Win-some Women, Women’s Journey of Faith, Women Who Worship, Christian Women Communicating International—if it’s a conference for and about women, Liz Curtis Higgs is honored to be there. She has spoken at more than 1,800 conferences in all 50 states of the U.S. and 15 foreign countries, including South Africa, Indonesia, Germany, Ecuador, and Japan.

Her messages are biblical, encouraging, down-to-earth, and profoundly funny, helping both sisters and seekers embrace the truth of God’s amazing, unchanging grace.

Liz’s dedication to platform ministry has not gone unnoticed. In 1995 the National Speakers Association honored Liz with their Council of Peers Award of Excellence. Her alma mater, Bellarmine University, presented her with a Distinguished Alumni Award in 2005. And she received an Honorary Doctorate from Georgetown College in 2010.

But what Liz cares about most are the women seated in front of her, first row to last. Liz is the author of 37 books, with 4.6 million copies in print. Her latest release, 31 Proverbs to Light Your Path, shows how thirty-one nuggets of truth reveal God’s faithfulness: “I will instruct you in the way of wisdom and lead you along straight paths” (Proverbs 4:11). In another recent devotional, 31 Verses to Write on Your Heart, Liz explores 31 favorite verses chosen by more than a thousand women.

The Women of Christmas offers a heartwarming Bible study wrapped inside a beautiful gift book with . Verse by verse, Liz unwraps the biblical stories of Elizabeth, Mary, and Anna, who each welcome the Christ child into the world in a marvelous and miraculous way. The Women of Easter shines a spotlight on three Marys who play vital roles in the life, death, and resurrection of Jesus.

It’s Good to Be Queen encourages readers to become as bold, gracious, and wise as the queen of Sheba, who journeyed across the desert to test the mind and heart of King Solomon. And Liz provides a twenty-first century take on the book of Ruth in The Girl’s Still Got It, dishing out meat and milk, substance and style, in a highly readable, always entertaining, and deeply personal journey.

In her best-selling Bad Girls of the Bible series, Liz breathes new life into ancient tales about the most infamous—and intriguing—women in history, from Jezebel to Mary Magdalene. Scripturally sound and cutting-edge fresh, these popular titles have helped more than one million women around the world experience God’s grace anew.

Liz spent a decade as an award-winning columnist for Today’s Christian Woman magazine. Her articles have also appeared in Faith&Friends in Canada, WomanAlive in Great Britain, and Enhance in Australia. Her popular nonfiction books include:

In November 2011 Liz led a Women of the Bible Tour of the Holy Land, taking women from 16 states and 2 Canadian provinces on the spiritual journey of a lifetime. From floating in the Dead Sea to riding a cable car up to Masada to an overwhelming evening of baptisms in the Jordan River to climbing the Via Dolorosa in Jerusalem, Liz and her Christian sisters shared a life-changing, never-to-be-forgotten experience. Read more about their tour on Liz’s blog.

Before she took a leap of faith to full-time speaking, Liz spent nearly a decade as a popular radio personality, moving town to town, up and down the dial. Since moving to the platform in 1986, Liz has been interviewed on more than 600 radio and television stations, including guest appearances on PBS, A&E, MS•NBC, NPR, CBC Canada, BBC Radio Scotland, Shine TV New Zealand, Radio Pulpit South Africa, Focus on the Family, Life Today with James Robison, 100 Huntley Street, and Midday Connection on the Moody Network. Feature articles about Liz have appeared in more than 250 major newspapers and magazines, as well as on Salon.com, Beliefnet.com, Spirituality.com, HopeforWomenMag.com, Kyria.com, and many other websites. 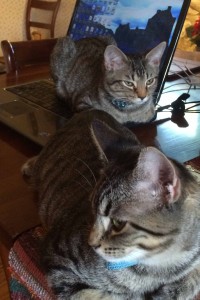 Liz grew up in Pennsylvania as the youngest of six children. She is married to Bill Higgs, Ph.D., who serves as Director of Operations for her speaking and writing office. Liz and Bill enjoy their old Kentucky home, a nineteenth-century farmhouse in Louisville, and are the proud (and relieved!) parents of two college grads, Matthew and Lillian. If you want to make Liz a happy woman, ask about her twin tabby cats, Boaz and Samson. “I have three abiding passions: encouraging my sisters in Christ, exploring the stories of women in the Bible, and writing novels set in Scotland of old. When I’m not traveling, speaking, or spinning a story, I connect with readers online, take copious photos, read historical novels, watch period films, and immerse myself in research—the more books, the merrier. I’m a lame housekeeper, a marginal cook, and a mediocre gardener, but home is still my favorite place to land.”